This Blog entry is my submission to the Sportsman Channel

and Outdoor Blogger Network writing contest.
(A re-done version of My First Deer but edited for the contest.  I racked my brain to find any other story that hits closer to home than this one but I couldn't.  So, Enjoy! Oh, and check out the contest- free stuff for writing? Christmas shopping, anyone?)


Holidays bring families together.  Children gather around a fire in the hopes that a grandparent’s story will be the catalyst for slumber that will cause Santa to make his appearance sooner.  Piles of food patiently wait to be ingested by hordes of hungry, football-loving people.  Some holidays bring people together.  For others, it is another story all together.

It was a cold Thanksgiving morning.  My boyfriend at the time and I were at a turning point in our relationship.  After a year of relatively good times, things were starting to go sour.  The weekend after opening day I came home to a half-empty apartment.  It felt terrible because at first, I experienced a sense of relief.  Relieved that I wouldn't have to hear him complain everyday, wait up for him or have to be the one to tell him to leave.

Once the initial shock melted away, I was sad, lonely and angry.  I had moved to the town I lived in essentially so we could be together. I worked hard to pay for everything and wasted money that needn't be wasted on a guy like him. Most of all, I was angry because I didn't know what would come of my hunting season.  We had been hunting his friend's property and I wasn't sure if I would be allowed to continue hunting there.

I eventually got a hold of him a little later. He told me how much he loved me and that we'd be together but he needed to move out in order to be less of a burden on my shoulders.  A complete cop-out if you ask me, but since he didn't ask, I didn't mention it.

Weeks went by, I went hunting every morning and afternoon I could. Some days he'd be there, some days not.  But every time I saw him, a part of my heart would ignite.  That part got smaller and smaller as the months went by and eventually went out.  But we're not there yet.

And then there was that Thanksgiving morning.  It started like any early morning hunt. 4:00am. Freezing cold walk outside to let Titus, puppy companion extraordinaire, pee and a quick run upstairs to throw my camo on.  It felt like I should have been festive, but my mood was anything but.   I drove to the land alone.  Snow was gradually turning to rain.  A damp chill infiltrated every crevice of the car.  When I finally pulled up to the land, he was standing there.   I faked a smile and loaded myself down with gear. 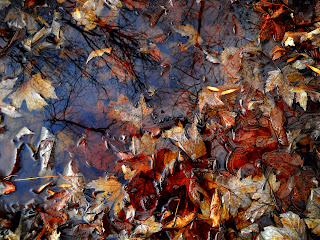 Calling the distance between the stands and where we stood a road is implying that the strip could support vehicle activity.  What we were faced with was a river of mud and freezing water.  Walking was turned into an aerobic workout in a matter of moments.  Gunky mud held fast to my boots which were deeply submerged in the sludge.  Staring at my stagnant, sad footwear I realized all I really wanted to do was go home and watch Thanksgiving parades. Somehow, I ventured forth.

I finally got to the stand and waited.   The morning was relatively quiet and nothing moved.  Once everyone descended from their tree stand thrones, the men decided a push was necessary to get the deer moving.  I was told to scale a monstrous stand and wait.

The guys started screaming and singing as they walked through the brush.

I stood and waited, my gun shaking in apprehension as my hands refused to calm.

Then came the moment the deer decided to peek outside the thicket.

I breathed and calmly lined the cross hairs.

A second later it was done and I could barely move.

Numbly, I cocked the shotgun just in case.

Once the push was over, the guys came out yelling and high-fiving one another as I looked down from the stand.  Encouraging me to come down and survey my handiwork, the menfolk gathered around my first harvest. I shakily put my safety on and climbed down. Walking over to where they had circled up, I saw the mound of deer in the brush.  I quickly knelt down and patted her stomach.  I said a quick prayer and thanked her for the meals she would provide.

The whole ordeal took only a second but forever I had been changed.
That Thanksgiving Day altered me in ways that I’m still attempting to fully grasp.

I felt empowered.  I felt like there was nothing I couldn't do.  And I fell in love with hunting.

Later after the hunt was over, I made a makeshift turkey dinner and extended an invite to my soon to be ex-significant other.  He said he'd call when he was done with another push.

But that night, I ate my small dinner and drank deeply from a cheap bottle of wine alone. Christmas movies were prematurely playing as the melancholic rain transformed into radiant snow in the opaque sky.  For the first time in a long while, I wasn't sad and I knew all would be well.  As long as I could hunt, life would be good.
Posted by The Writing Huntress at Tuesday, November 09, 2010

What a great read.

Hunting can be so therapeutic in so many ways - and can even mend a broken heart.

Well done! I have an old post on my blog about my first Christmas alone after a divorce, when the kids were with thier mom. A friend with a vacant ranch house, my black lab, and some ducks were my salvation.

Just getting around to reading all the OBN entries. Nicely done and great story. I guess we both found out how special hunting and Thanksgiving really are.

There is something truly unsettling about airing the more tumultuous parts of my past for the blogging world to see but with feedback like this, I don't mind.

You make slogging through the mud and sitting in a tree on a rainy day sound like it's a good thing!